Delta parkrun is delighted to announce that it will be hosting an extra event this Freedom Day - April 27, 2020. Get your usual Saturday fix on Freedom Day too. Whoop whoop!!

So this is Christmas

It's time to have fun

A parkrun at Christmas!

And one on New Year

Look out for the doubles

There are plenty around

Check out the compendium

Where they can be found

(with thanks to Southwark parkrun)

After a week-long downpour and events getting cancelled left, right and centre, the weather was always going to be the talk of the town this week. Waking up and looking out my window to grey skies and muddy puddles in my driveway I knew that the Delta (home of South African parkrun) faithful would not disappoint and I wasn’t wrong.

Upon arrival just before 7am I was greeted by the Run Director as well as a host of newly developed dams. A quick course check revealed a flooded bridge at the 1 km mark and, surprisingly, only patches of mud here and there. The hills were finally working to our advantage: the drainage of the park was spectacular!

7:30am and the cars began to stream in. As a car parking marshal I was quickly reassured that we won’t get the regular attendance of over 1,000 enthusiastic parkrunners, but it was clear that a little bit of mud and imminent possibly of rain wasn’t going to scare the regulars and tourists away.

Soon a small group started to form under the trees, most looking to the skies, others taking a walk to take pictures of the rivers and dams that had formed where the overflow car park used to be. Locals talking about 90ml to 100ml of rain in a couple of hours overnight, others’ gauges had just reached capacity "and some".

At about 7:45am, with 100-odd runners at the starting point, the Run Director made the call to run the course in reverse to avoid congestion over the narrow bridges at the 1 km mark. As the rain began to fall and we started getting word of even more cancellations rolling in across the country, we were reassured that Delta doesn’t just cancel for a bit of rain!

Starting up the hill is never easy. Patches of mud here and there – the course had taken the rain well. The athletes that did steeplechase in school clearly had the advantage as two hopped passed me crossing where the road used to be. 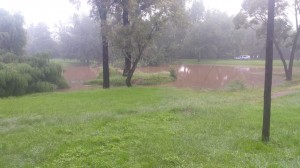 Delta's new "dam" near the car park before Polly Shortts

The scenery coming down the hill overlooking the park was a great change and I definitely think the course should be run in reverse more often. All went well till the 4 km bridge, at stages knee deep, followed by slippery mud going up the hill with wet heavy shoes wasn't easy and I am sure most came to the same conclusion as me that it was better just to walk up it.

Getting cheered in by the volunteers, most of whom had been standing in the rain all morning, excited parkrunners claiming their first ever top 50 or top 100 because today surely wasn’t a day for PBs!

It was an honour to join the Delta team and I would like to thank the volunteers and organisers as well as the sponsors for another successful, satisfying Saturday morning out with the parkrun family

Delta’s female record is broken every two years and 2018 was no exception.

If some of these names are familiar to you, they should be! They represent some of the cream of South African running talent.

Ann Ashworth is the 2018 Comrades Marathon winner but she also started both the Roodepoort and Bryanston parkruns. Zola Budd Pieterse, who hails from Bloemfontein and was famous for running middle and long distances barefoot, competed in the 1984 Olympic Games (representing Britain, but that’s another story). Rene Kalmer is also an Olympic athlete, having represented SA at both the 2008 and the 2012 Summer Olympics.

Tamara Jewett, a Canadian visiting SA, popped into two parkruns and taught locals a few lessons (she still holds Voortrekker’s record). A name to watch though is Carina Viljoen. This 21-year-old South African athlete is currently studying in Arkansas and has a 5 km PB of 16:28.3. She comes from great running genes – her father Gerhard Viljoen has a 7-hour Comrades to his name. 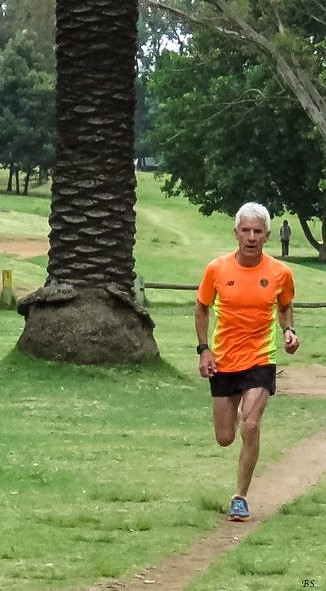 Sadly, we don’t have the same good news regarding the male record. Delta’s male record holder is an Unknown Athlete who completed Event 96 in 2013 in 15:29. We keep hoping that someone with a barcode will better this time and we have an excellent line-up of men who are likely to do so. Perhaps the hottest contenders are Admire Muzopambwa (16:09) who has placed first at Delta 49 times, Quintin Honey (16:13) and Rapula Kekae (16:32) have come close this year.

So, gents, the challenge is on. We want a named athlete to take the crown!

Great news! Delta parkrun will once again host an event on Christmas Day (at 08h00) and on New Year's Dat (at 09h30). These will be official parkruns and they will count towards your milestones.

Some of the other Joburg parkruns will also hold events on New Year's Day, so you will be able to do two runs that day and both will count towards your official parkrun total. Check them out here: http://www.parkrun.co.za/christmas-compendium/

We would love to host you at Delta parkrun if you are in Joburg over the festive season!

Delta will be hosting additional events on both Christmas Day 2016 (at 08h00) and New Year's Day 2017 (at 07h30). Some of the other Joburg parkruns will also hold events on New Year's Day, so you will be able to do two runs that day and both will count towards your official parkrun total.

If you are in joburg over the holiday season, be sure to join in the fun!

Saturday 24 September was a very special day for Delta parkrun. Tracy Rankin became the country's first member of the ultra-exclusive 250 Club. Yes, Tracy has completed 250 parkruns. What makes this even more remarkable is that she has only missed 8 parkruns ... ever. And some of those occasions were for things like, oh you know, running the Two Oceans!!

We are so proud of Tracy and delighted that she chose her home run of Delta for this momentous occasion. What she won't tell you, is that she also volunteered to assist with the pre-run setup on the day.

2015 will see Delta parkrun hosting extra events on Christmas Day and on New Year's Day. The only parkrun to be held in Gauteng on Christmas, Delta parkrun will take place at the normal time of 08h00. On New Year's day, you will be able to do two parkruns and they will both qualify as official runs. Delta and Lonehill will start at 07h30 and Golden Harvest and Modderfontein will start at 09h30. Please go to our Facebook page (Delta parkrun) for more information and a map to Modderfontein. We hope to see as many parkrunners as possible and look forward to hosting you. The Delta Team